The module, currently in patent-pending status (just granted in the US), is the innovative element of the system and it has been designed with focus on gaining maximum stability, lightness and handiness. Each module consists of a self-supporting structure that incorporates an accurate 2-axes solar tracking system. The structure integrates specifically designed PV panels that use semi-flexible cells technology.

In addition it is easily disassembled with no tools and all resulting elements are folded in a compact volume that fits in a small suitcase for its transport and storage.

The structure includes a highly accurate 2-axes solar tracker based on geopositioning that keeps the panel permanently facing the sun. The increase in performance may reach percentages up to 80% depending mainly on the latitude. As opposed to the classic peak-shaped generation profile from fix panels, a 2-axes tracker makes such profile more constant and this reduces the need of storage capacity (the most expensive element in a solar installation) in percentages that can reach up to 40%. This point is illustrated in the following graph that shows the theoretical daily generation profiles of a set of panels of 1 kW with and without tracker: 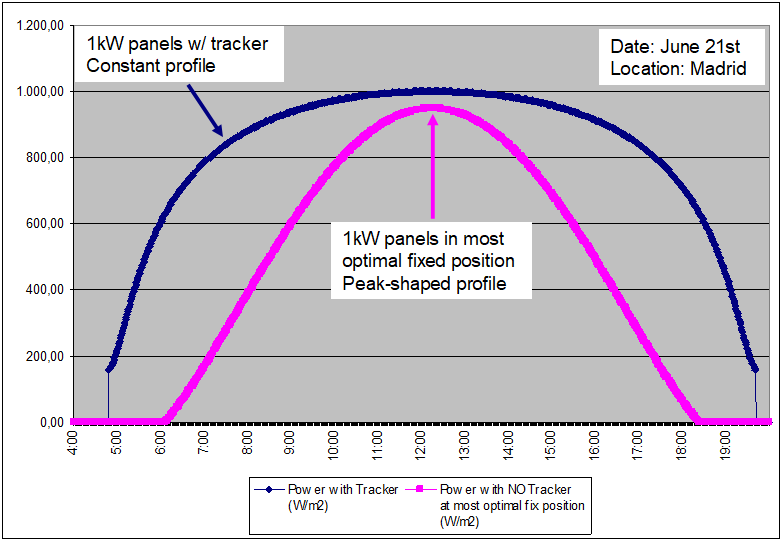 The self-supporting design provides great resistance capacity to forces and moments exerted on the panels and it could be used with no fixation mechanisms in places with low exposition to wind. For places with higher exposition or when a more permanent use is expected the tripod supports are designed so that several fixation systems to ground (in all cases only requiring simple tools) can be applied.

MODULES include a stow security system based on wind sensors that moves elevation to 90º (panel parallel to ground) when high wind threshold is detected. This stow system has been already tested in laboratory conditions in a wind tunnel (from the company VORTEX BLADELESS). The following video demonstrates how it works (NOTE: for the sake of the test stow activation is setup to trigger at just 20km/h and once stow is completed wind speed is increased to tunnel MAX power ~40km/h )

To ease the movement in operation of the modules 2 handles are available: 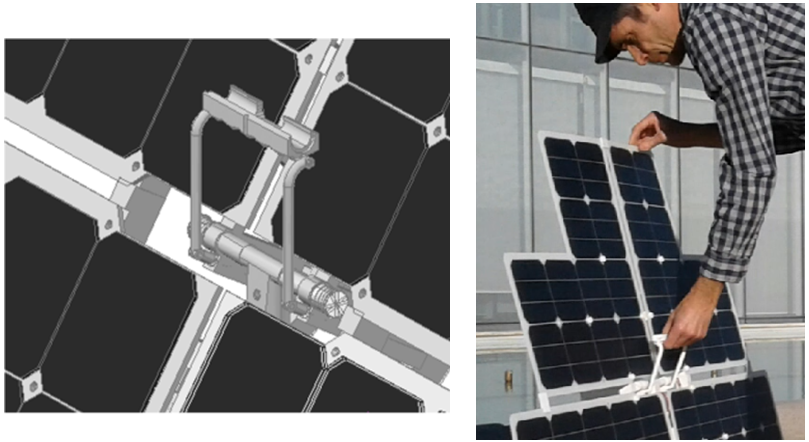 The PV panels of the modules use semi-flexible technology cells that allow their manufacturing in thin multilayer panels with no metallic frames resulting in thicknesses of less than 3mm. The resulting weight is 5 times lighter than traditional ones, an advantage of paramount importance in a portable system.

The design consists of 4 separated subpanels which allow their folding in a very compact volume to ease their storage and transport. Once assembled the configuration is pyramidal in shape to gain stability and reduce vibrations.

3 panel sizes have been designed in the project with resulting nominal powers of 105W,  160W and 240W.

The following table shows a summary of their design characteristics: