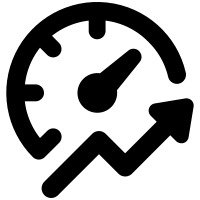 As mentioned in the short definition the solar tracker is highly accurate since it is using an innovative algorithm based on geopositioning. Thus, the system works with full accuracy everywhere in the world with no configuration tasks required from the user when changing location like in other tracking systems. This advantage is particularly necessary in a portable system like the one presented.

Strictly speaking the improvement in performance from a tracking system depends on the latitude and also the altitude. The theoretical calculation requires the solving of the apparent solar astronomical equations and the application of the air mass factor that refers to the atmospheric thickness sun radiation crosses for each sun apparent position.

The resulting radiation power per unit area can be calculated for different latitudes (and altitudes) and compared with the one crossing a fixed unit area in its optimal orientation. In a previous phase of the project this calculation was carried out applying Cooper's method for the calculation of sun declination and using a spherical atmosphere approximation. The resulting annual energy generation, that is obtained from the integration of daily powers along the year, gives an accurate approximation of the potential energy increase when using a tracking system. This theoretical calculation was also experimentally confirmed in good approximation and as an indicative basis it reaches 49.55% in Madrid (Lat 40.5ºN & Alt 690m) and varies from 44.5% in Dakar, Senegal (20ºN) and 73,91% in Narvik, Norway (70ºN).

The following image illustrates this comparison in Madrid: 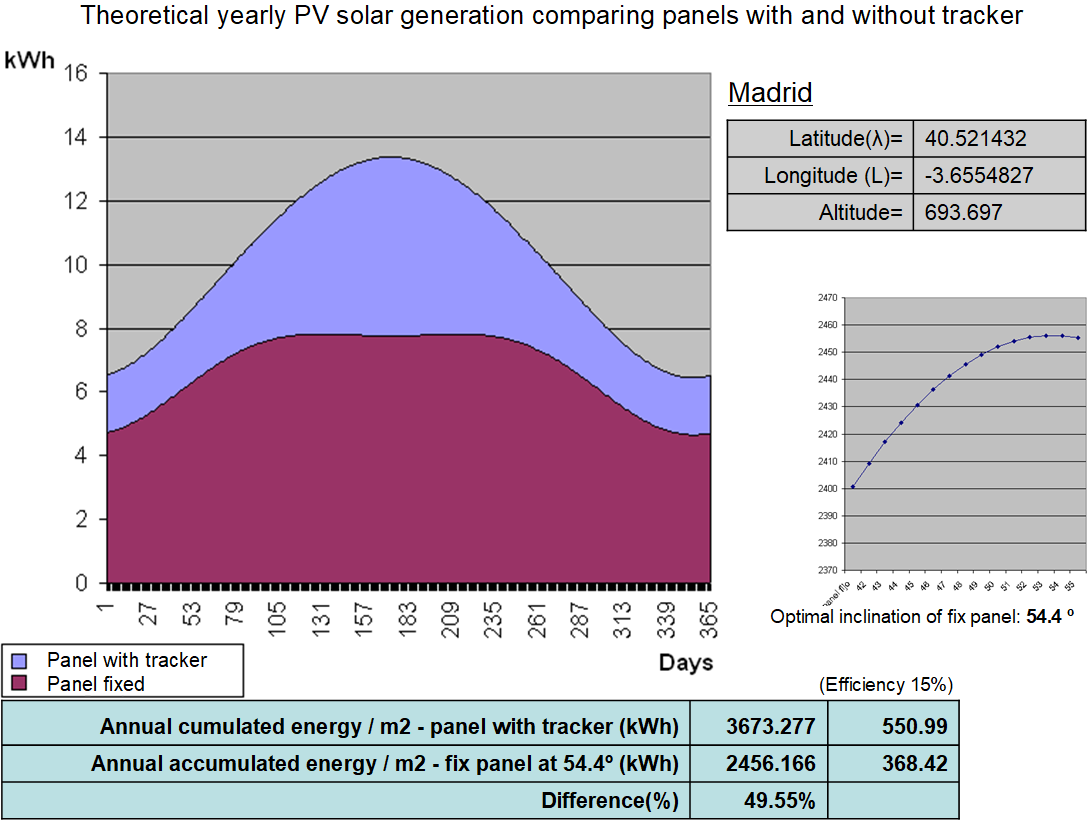 The same analysis in Narvik (70º North) looks like this: 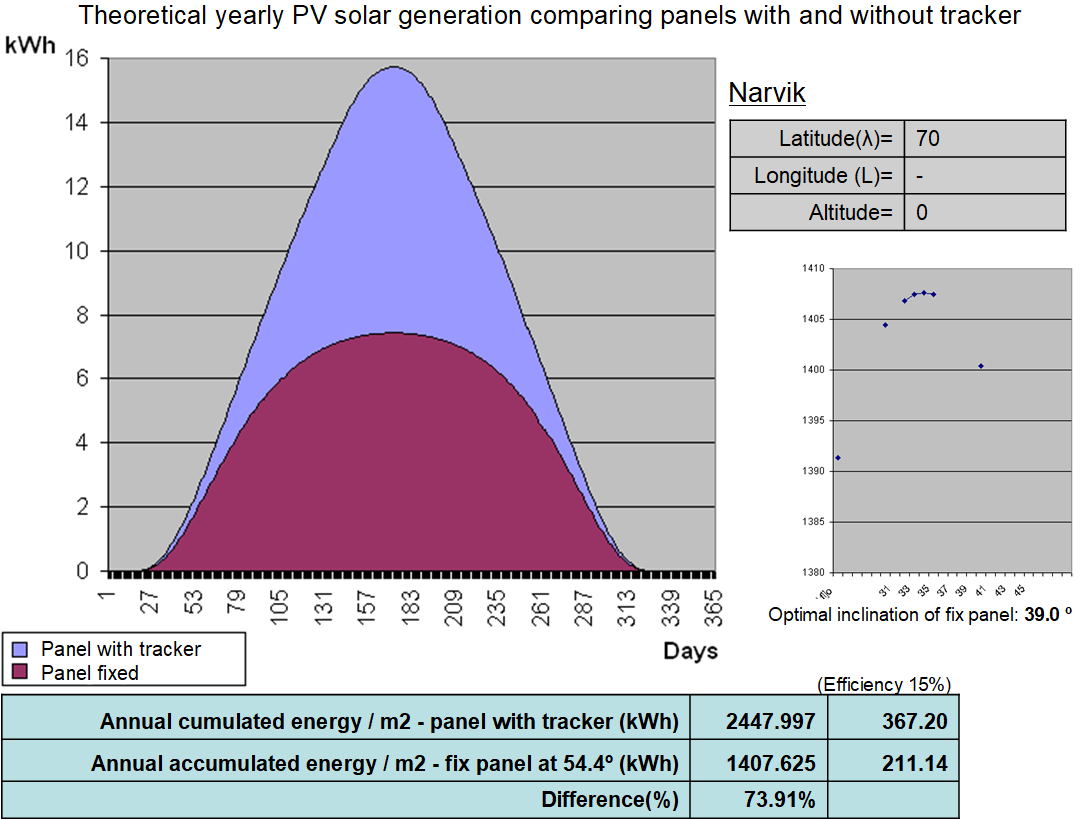 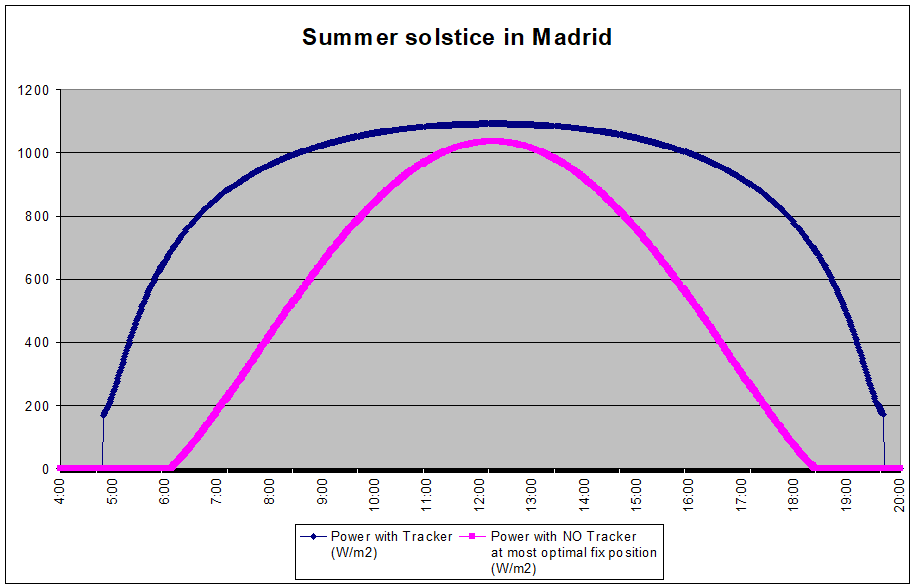 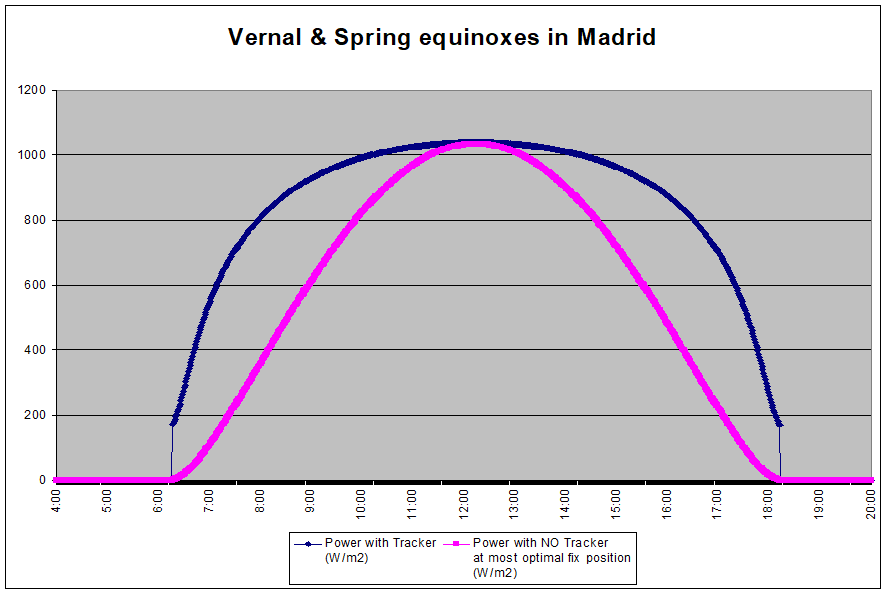 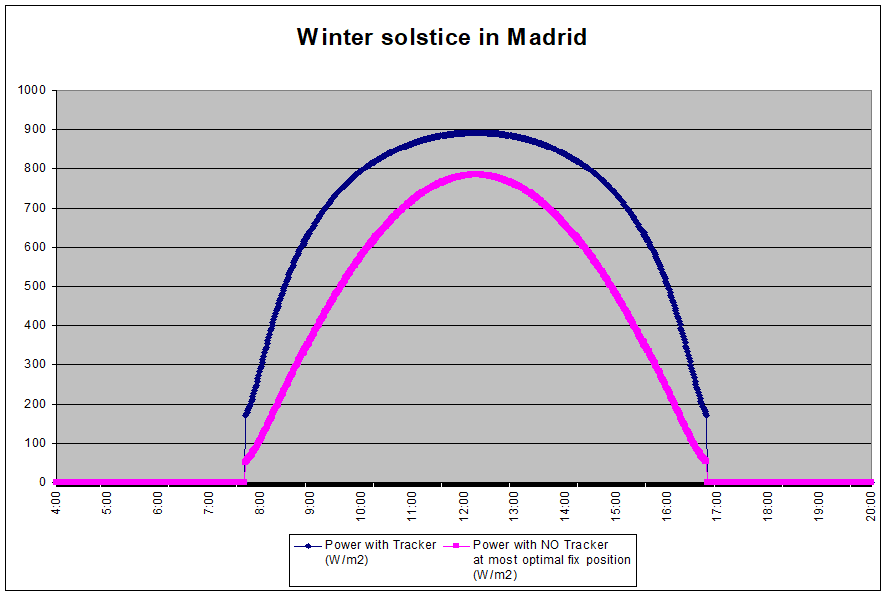 This change in generation profiles has a direct impact on the dimensioning of storage capacity. Batteries are key in solar installations to store the surpluses of generated energy (versus the amount consumed by the installation loads) that will be discharged in periods of shortages (when loads exceed generation). The use of a tracking system, that makes the generation profile more constant and therefore closer to the loads profile, allows a reduction in storage capacity in percentages up to 50% entailing substantial savings in direct costs and also in weight, a very relevant factor in a portable system.

The following figure illustrates these advantages comparing, as an example, the generation profiles of a 1kW set of panels with tracker, with a set of fixed panels 1.5 kW (to match the yearly generation in Madrid), and considering a constant average load of 800W during daytime. 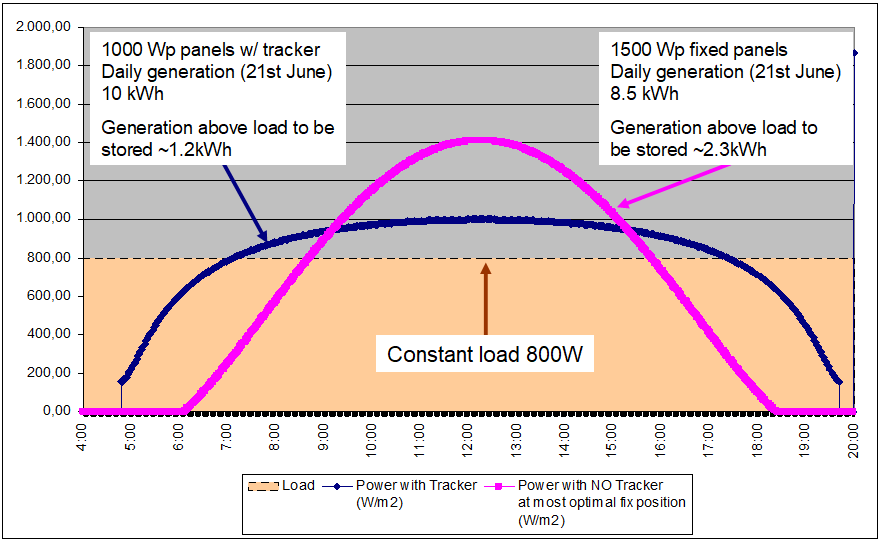 As shown in the following figure, in the above fixed-panels installation the morning and afternoon periods (in which the feeding of loads requires to be supported by batteries) are large relative to central daytime periods (in which loads are fully fed by panels and surpluses are stored in batteries). 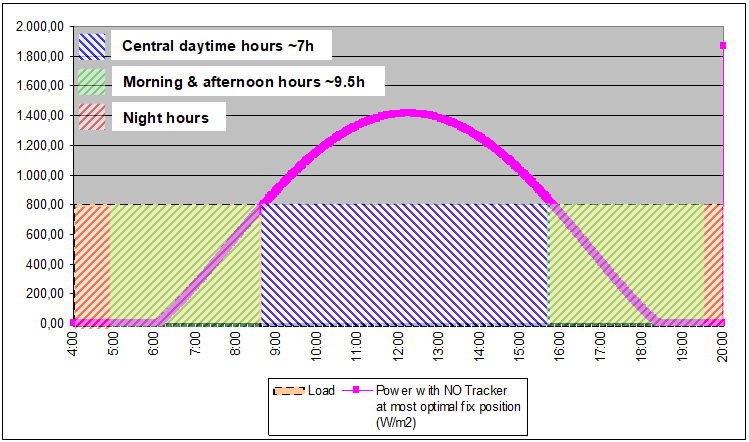 The following figure shows instead how small morning and afternoon periods become when considering the use of the 2-axes tracker in the above example. Energy stored in the batteries can be reserved for night hours and capacity can be much smaller. 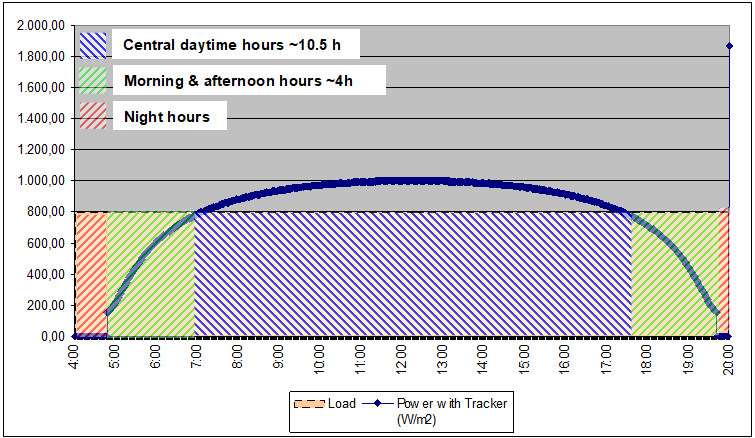 Finally, since the panels weight and size in each structure is limited there's crucial interest in integrating the highest efficient solar cells available in the market that can be assembled in semiflexible panels. Traditional solar cells are typically reaching efficiencies around 15%. The current SUNPOWER cells used in the last version on the modules are reaching efficiencies greater that 20%.